Today, on our Cyber Launch Party Blog, we are celebrating the release of a sexy new romance from Erin Nicholas called HOTBLOODED. 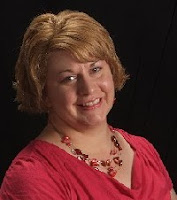 Her mama always said the women in their family were hotblooded...

And it's been causing Brooke Donovan trouble her whole life. But it wasn't until her mother took on the most powerful man in Honey Creek, Texas, that Brooke truly realized the daughter of the town whore didn't stand a chance. When she left, it was supposed to be for good. But now, thanks to her late husband's deal with their hometown, she's back in the last place on earth she wants to be. Temporarily. As soon as her debts are paid off, she's outta here. Until in walks the one man who can make her rethink everything.
Dr. Jack Silver fixes things. So, when he learns his uncle is responsible for Brooke losing her husband, his sense of honor drives him across Texas to make amends. Instead of a broken woman, though, he finds a gorgeous, feisty physician's assistant trying to survive in a town that wants her gone. She also has a mile-high fence built out of pride - and a clinic that's at risk of going belly up. She may not want his money, but the clinic? He can fix that. He just never expects that in setting Brooke back on her feet, he'll be swept right off his own.

Product Warnings - Contains a hot-blooded woman, a man who really likes that about her, a town with a long memory, and a cappuccino machine that makes it all worthwhile.

WIN - Leave Erin a question today at her Cyber Launch Party and your name goes in the hat for a copy of her new book!  Please be sure to leave your email address so we can contact you if you are today's winner!
Posted by AuthorIsland.com at 10:00 AM