Today we are celebrating the print release of Ann Hinnenkamp's DYAD QUEST, the second book in her paranormal romance series! 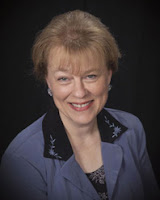 Born in a decade that starts with an F, Ann now finds herself in an age decade beginning with the same dreaded letter. Her plan had always been to accept aging with the same effortless grace as any movie star with the last name of Hepburn, but now that her forehead is sliding down around her nose, and her neck attracts every rooster in the yard, she’s given up on grace and put her faith in a good moisturizer and turtle neck sweaters.

Ann had a B.A. in theatre and went to graduate school at the U. of M. in the M.F.A. acting program. She freelances as an actor and director in the twin cities area and has played everything from Eleanor of Aquitaine, to the third extra on the right with the gap in her front teeth.

Taking the advice from her father to heart, she never quit her day job. She works at a messenger service where the motto is: If you got it, a courier brought it. Her years in the business world have taught her a few valuable lessons: When designing a floor plan, never put your own office across from the bathrooms. All it has to do is snow to turn a great day to shit. It’s impossible to pick up a monkey at the airport, look him in the eye, and then deliver him to a testing lab. And transporting caskets, even when they’re empty, is just plain scary.

Aiden Rawlings has had centuries to perfect the art of staying unconnected. For over four hundred years, he's served as human partner to one of the immortal Dyads, protecting mankind from their worst enemy - themselves. But all his carefully built emotional walls start to crumble when he finds Jude Kapfer dying from gunshot wounds and asks the Dyads to heal her. They agree on one condition, Aiden must protect Jude and discover who is behind the attempt on her life. He's only got one problem with that - how can he protect her if he can't take his eyes off her?

Jude is having a bad week. First, a masked madman shoots her, then, two insanely sexy men show up and heal her and she discovers humans are not alone on the planet. Now, in order to save her life, she must team up with Aiden and allow herself to be drawn deeper in to the mysterious, hidden world of the Dyads. Maybe she should take her chances with the masked gunman. At least he's human.

WIN - Leave Ann a comment or question today at her Cyber Launch Party and your name goes in the hat to win the first book in her Dyad Series, DYAD DREAMS, in your choice of e or print! Please leave your email address so we can contact you if you are today's winner - Good Luck!