Today we're celebrating a new release that kicks off the Sexy Superheroes Series for Rebecca Royce! 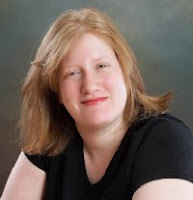 As a teenager, Rebecca Royce would hide in her room to read her favorite romance novels when she was supposed to be doing her homework. She hopes, these days, that her parents think it was well worth it.

Rebecca is the mother of three adorable boys and is fortunate to be married to her best friend. They live in northern New Jersey and try not to freeze too badly during the winter months.

She's in love with science fiction, fantasy, and the pararnormal and tries to use all of these elements in her writing. She's been told she's a little bloodthirsty so she hopes that when you read her work you'll enjoy the action packed ride that always ends in romance. Rebecca loves to write series because she loves to see characters develop over time and it always makes her happy to see her favorite characters make guest appearances in other books.

In Rebecca Royce's world anything is possible, anything can happen, and you should suspect that it will.

Book one in the Sexy Superheroes Series

Wendy Warner is a bit of an oddball. Raised in an orphanage, she has found solace and friendship by watching the television show, Space Adventures, and participating in fan clubs related to the show. Every month, on the second and third Friday, Wendy comes to work dressed in a costume from the show that she wears to charity events. This has earned her the disdain of many of her coworkers but not from her boss, the president of the company, Draco Powers, who rather likes the way the uniform hugs all her curves in the just the right places.

Draco Powers is a real-life Superhero who told the world that, yes, Superheroes do exist, but, no, we won't work for free or without health insurance. Some people refer to him with derision as the "Capitalist Superman." Draco is being hunted by an organization called the Organization, whose motives are unclear and yet still cause death and destruction wherever they go.

The Organization has decided that Draco's biggest weakness is the way he cares about his employees and has picked Wendy out as their next target. To save her, Draco will have to come to terms with his real feelings for Wendy and why it is that he has so long resisted complicated relationships. But he's running out of time . . . .

WIN- Leave Rebecca a comment or question today at her Cyber Launch Party and your name goes in the hat for a free download of her new book! Please leave your email address so we can contact you if you are today's winner!