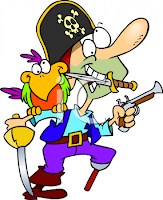 Just because you couldn't make it to the 6th annual Lori Foster and Dianne Castell Reader and Author Get Together this weekend here in beautiful West Chester, Ohio doesn't mean you can't party down at the AuthorIsland.com 2nd annual Reader's Bash!

This year we're partying like pirates with eye patches, skull and crossbone hats and a good time will hopefull be had by all!!!

And just because you're not here with us doesn't mean you can't get in on the prizes - we have a bag full of goodies for one reader who posts to one of our posts made during tonight's party from 8pm to 11pm EST. The more you post, the better your chances....a winner will be announced after the party - so please leave your email address so we can hook up with you if you are our cyber winner!

Aaaarrrrgggghhhh! - exhortation of discontent or disgust
Ahoy! - Hello!
Ahoy, Matey - Hello, my friend!
Ahoy, me Hearties! - the same as saying "Hello, my friends!"
Avast ye - stop and check this out or pay attention
Aye - yes
Batten down the hatches - put everything away on the ship and tie everything down because a storm is brewing
Bilge-sucking - insult
Blimey! - exhortation of surprise
Blow me down! - expression of shock of disbelief akin to "Holy Crap!"
Blow the man down - command to kill someone
Booty - treasure
Crow's nest - small platform atop the mast where the lookout stands
Cutlass - short heavy curved bladed sword used by pirates
Davy Jones' Locker - fabled, mythical place at the bottom of the ocean where the evil spirit of Davy Jones brings sailor and pirates to die
Dead men tell no tales - phrase indicating to leave no survivors
Doubloons - other coins or found in pirate hoards and stashes
Feed the fish - will soon die
Hang 'im from the yardarm - punishment of those captured in battle
Head - the pirate ship's toilet
Heave Ho - give it some muscle and push it
Hempen Halter - a noose for hanging
Hornswaggle - to defraud or cheat out of money or belongings
Jacob's Ladder - the rope ladder one uses to climb aboard a sloop
Jolly Roger - pirate's flag including white skull and crossbones over a black field
Keelhaul - punishment in which a person was dragged underneath the pirate ship from side to side and was lacerated by the barnacles on the vessel
Landlubber - big, slow clumsy person who doesn't know how to sail
Letters of Marque - letters issue from governments during wartime to privateers endorsing the piracy of another vessel
Man-O-War - pirate's ship outfitted for battle
Me - my
Old Salt - an experienced sailor
Pieces of eight - coins or found in pirate stashes
Pillage - rob, sack or plunder
Poop deck - the part of the ship farthest to the back, which is usually above the captain's quarters. This is not the bathroom.
Privateer - government-sponsored pirates
Rum - pirate's traditional alcoholic beverage
Savvy? - do you understand and do you agree?
Scallywag - mild insult akin to rapscallion or rogue
Scurvy dog - the pirate is talking directly to you with mild insult
Scuttle - to sink a ship
Seadog - old pirate or sailor
Shark bait - will soon join Davy Jones' Locker
Shipshape - cleaned up and under control
Shiver me timbers! - comparable to "Holy Crap!"
Son of a Biscuit Eater - insult directed towards someone you don't like
Thar she blows! - Whale sighting
Three sheets to the wind - someone who is very drunk. One sheet is mildly drunk and four sheets is passed out.
Weigh anchor and hoist the mizzen! - pull up the anchor and the sail and let's get going
Ye - you
Yo Ho Ho - cheerful exhortation to demand attention

Posted by AuthorIsland.com at 8:00 PM