A PORTAL IN TIME by Claire Fullerton

When we are inexplicably drawn to love and a particular place, is it coincidence, or have we loved before? ...

Enigmatic and spirited Anna Lucera is gifted with an uncanny sixth-sense and is intrigued by all things mystical. When her green, cat-eyes and long, black hair capture the attention of a young lawyer named Kevin Townsend, a romance ensues which leads them to the hauntingly beautiful region of California's Carmel-By-The-Sea where Anna is intuitively drawn to the Madiera Hotel.

Everything about the hotel and Carmel-By-The-Sea heightens her senses and speaks to Anna as if she had been there before. As Anna's memory unravels the puzzle, she is drawn into a past that's eerily familiar and a life she just may have lived before.


“A Portal in Time” is a 50,000 word Paranormal/Romance novel about a woman who realizes that she has lived before. Employing oscillating chapters that develop the lives and romances of two women in different time periods, the story begins in the years 2000 and 1901 respectively, in the hauntingly beautiful region on the Monterey Peninsula called Carmel, California.

Rich in mystique, foreshadow and character development, “A Portal in Time” introduces the reader to Anna Townsend and her husband, Bill, who check into The Madeira Hotel in Carmel, California in the year 2000 to celebrate their one year anniversary. Not only is Anna lovely, spirited and artistic, she is also conveniently graced with the asset of dependable intuition, which is revealed to the reader as the story of her meeting and eventual marriage to Bill Townsend is told in flashback in order to bring her through The Madeira hotel’s front door.

Subsequently, and beginning in the year 1901, the reader meets Valeria Sienna, who is the eighteen year old daughter of an affluent, Italian immigrant and his genteel wife who enjoy immense prosperity and popularity in turn of the century San Francisco. Valeria possesses an energetic enthusiasm for life that captivates the reader when she begins her courtship with a Norwegian artist named Anders Kristiansen who, much to the chagrin of Valeria’s father, is suitable on every level though he is neither an American nor an Italian.

“A Portal in Time” is an oscillating, liner growth story steeped in the language and social mores of two different eras with characters both central and supporting whose words and actions fit seamlessly together and bridge the time frames like pieces of a puzzle. What drives the story is the climax of a profound, life altering tragedy which Valeria Sienna lives through after her marriage to Anders Kristiansen and Anna Townsend recalls through past life memory on one particular night while staying at the Madeira Hotel. Coincidence, similarities, foreshadow and intrigue ultimately reveal that the site of The Madeira Hotel is the actual house that Anders Kristiansen built for his young bride and it is this fact that triggers the soul memory of Anna Townsend. 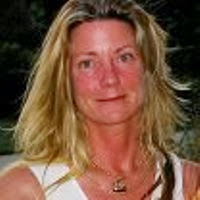 Claire Fullerton wrote her own weekly column for The Malibu Surfside News from 2009-2010. She has been published in numerous magazines, and repeatedly in the “Chicken Soup for the Soul” book series. Claire is the 2013 first runner up of The San Francisco Writer’s Conference Contest for her narrative non-fiction essay, “Mastering Ambiguity,” which she is currently turning into a novel.

“A Portal in Time” is her first novel, and the manuscript for her second novel is under review.