She was a genetic experiment that was never supposed to get out of the lab. If the government finds her they will kill her without hesitation. Her memories of her early life are sketchy but the one clear image she has is of a brother who saved her life, and then disappeared.

Jackson knows what it's like to lose your entire family in one bloody instant, and he vows to help Saralyn find hers. It doesn't hurt that he finds her irresistibly sexy or that the attraction is mutual. They enlist the rest of the mercenary team in a search operation that takes them into the heart of the corrupt government.

Anne Kane is a gorgeous supermodel who writes romance in her spare time while jetting around Europe with a string of boytoys in tow. 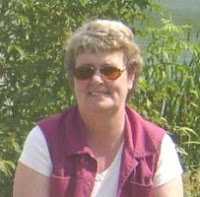 Hmmm… no one is going to believe that. How about this? Anne is an undercover agent for a super secret government agency, and when not saving the world for democracy and all the good people, she writes romance one-handed on a special mini computer designed just for her by a mad scientist.

Yeah, that sounds way better. So, ignore the people who tell you she’s just an ordinary person with an extraordinary imagination. They’re just jealous because she gets to play with James Bond and vacation in exotic locations.

Honestly! When she's not busy saving the world or writing the next great novel, she likes to kayak, hike, ride motorcycles, swim, skate, practice karate, play her guitar, sing, and of course, read.

WIN - Leave Anne a comment today at her Cyber Launch Party and your name goes in the hat for a copy of PRIVATE SKIRMISH - Book one of her Mercenaries Series!

We're also celebrating over on Facebook today - Stop by for another chance to win!
Posted by AuthorIsland.com at 10:00 AM