Today at our Cyber Launch Party Blog, we're celebrating the release of 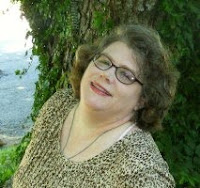 Lee Ann is a Missouri native. Although she emerged from the old neighborhood in her hometown of St. Joseph, Missouri to make her home in the rugged Missouri Ozarks long ago, she retains nostalgia for the hometown.
Her first novel, Wolfe’s Lady, debuted from Evernight Publishing in December 2010 and her second, Love Tattoo, came out in March 2011 from the same publisher. She has three other novels due out in 2011 and two confirmed for 2012. She is a member of Romance Writers of America, Paranormal Authors Guild, Missouri Writers Guild, and the Ozark Writers League.
She now lives with her husband, three children, and one feisty Jack Russell terrier in what passes for the suburbs in a small town.
WEBSITE   ***   BLOG *** FACEBOOK   ***   TWITTER   ***   GOODREADS

When a routine trip to the local discount store erupts in gunfire, Kendra Driscoll finds herself rescued by a stern-faced federal marshall. When he whisks her away in a government van, she must face the fact that her witness protection cover is blown. Now she'll have to deal with being in Marshall Timothy Campbell's custody until further arrangements can be made. Timothy takes her to a safe house tucked away in rural southern Arkansas and she reverts to being Deborah Kincaid.
As she gets to know Tim, Kendra realizes he isn't as stern as he looks. Underneath his gruff exterior she finds a kind, sensitive man and soon, despite the danger from the Bianco family, she also finds herself falling in love. Worse, so does Tim. He falls hard for his witness and that's something that isn't supposed to happen.

But when events turn ugly and Tim suffers a life-threatening rattlesnake bite, it's up to Deborah herself to face her enemies and deal with the danger for the last time.

A TIME TO LOVE by Lee Ann Sontheimer Murphy

Reclusive songwriter Samuel Baird lives on a remote Arkansas mountain drinking his life away. The last thing he wants is a woman to complicate things but during a spectacular thunderstorm, a woman arrives just in time to save his life.
She says she comes from the late 1800's and he thinks she is crazy but Annie still manages to gain his attention and affection.

To reach a happily ever after, Samuel and Annie must overcome several obstacles, past and present, but in the end, they find the happiness that they seek.
BUY THE eBOOK *** BUY IN KINDLE *** BUY IN NOOK *** READ THE EXCERPT *** WATCH THE TRAILER

WIN - Leave Lee Ann a question today at her Cyber Launch Party and your name goes in the hat for a copy of your choice from her new two new books and some Arkansas swag to celebrate the setting of both her new books! Please leave your email address so we can contact you if you are today's winner - Good Luck!
Posted by AuthorIsland.com at 10:00 AM