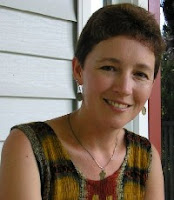 Vampire hunter Gideon Green sure as hell never intended to become a vampire's servant. But when Anwyn Naime, a woman with whom he shared an unforgettable night, is turned by a vampire pack, they become bound by something far greater than either imagined. It also forces Gideon into an uneasy alliance with one of the most terrifying vampires he's ever encountered: the mysterious Daegan Rei.

Daegan also has a vested interest in Anwyn. His history with the lovely nightclub owner is both intimate and intense. As Gideon and Daegan shepherd Anwyn through her dangerous validation with the Vampire Council, it's clear the three of them must learn to trust each other. But as boundaries between them erode and vulnerabilities surface, Gideon realizes he is no longer the man he thought he was - changed by a strange and unexpected bond with the two new people in his life he can't survive without...vampires.

WIN - Leave a comment or question today for Joey at her Cyber Launch Party and your name goes in the hat for an autographed copy of your choice from books I through V of her Vampire Queen Series! Please leave your email address so we can contact you if you are today's winner!
Posted by AuthorIsland.com at 9:00 AM