DO YOU TAKE THIS CAT by Missy Martine 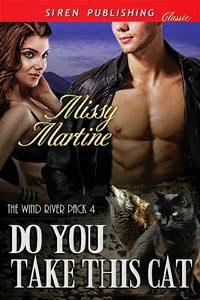 Rennia helped to rescue Ray and his sister Kati when a New York crime boss held them hostage. She was devastated when he rejected her after seeing her shift from cat to wolf. She returned to her mountain home certain she’d lost her mate forever.

Ray's family is forcing him to attend his sister's wedding in Wyoming. He’s convinced she’s making a mistake in setting up house with two men who aren’t even human. The whole idea of people shifting into animals gives him nightmares.

In one last effort to claim her mate, Rennia takes Kati’s advice and lets Ray think she’s human when they meet. For a while she’s in paradise. They’re beginning to fall in love when an old enemy strikes out at the Wind River Pack.

Will Rennia lose her mate for good when he finds out she’s not just a pretty girl? 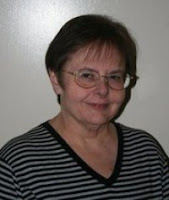 WIN - Leave Missy a question today at her Cyber Launch Party and your name goes in the hat for a pdf copy of any book in her backlist! Please leave your email address so Missy can contact you if you are today's winner.


We're partying over on Facebook today too!  Stop by and let's talk Sexy Shifters!
Posted by AuthorIsland.com at 4:00 AM