Celebrating A New Release In Fantasia Virtuoso's The Hidden Series

She never planned on dying at eighteen, much less awakening to live in the world as a creature of the night. Still, Noel doesn’t complain. She embraces who she’s become, even through the dark loneliness she feels at times.

Have you ever have dreams so alluring you couldn’t get them out of your mind?

Jett knows they're only dreams, but they feel real to the point that he closes his eyes during the day just to embrace them again. No matter the danger to his soul if such a beautiful nightmare does exist. It goes by the sweet name Noel. 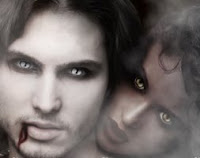 As part of the Bible Belt, and just a few hours away from the Protestant Vatican, Memphis is home to more than 2,000 churches. With all major religious beliefs and denominations being well represented  in the city itself (including Buddhists, Christians, Hindus, Jews and Muslims), a faction of Vampires can virtually go unnoticed.


WIN - Leave Fantasia a question today at her Cyber Launch Party and your name goes in the hat for a copy of DARK MIST!  Be sure to leave your email address so Fantasia can contact you if you are today's winner - Good Luck!

We're also celebrating over at Facebook today - stop to say hi!
Posted by AuthorIsland.com at 6:00 AM