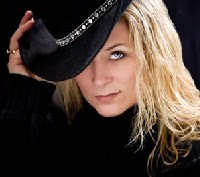 Why does she have a particular fondness for all things western? Well, she's a fourth generation South Dakotan, living in the Black Hills, which is chock-full of interesting characters, including cowboys, Indians, ranchers, and bikers. The geographical diversity of the surrounding area showcases mountains, plains, and badlands. Living in and writing about rural settings gives her a unique perspective, especially since she's not writing historical westerns. Through her fictional world, she can show the ideals and the cowboy way of life are still very much alive.

She also write a dark, gritty mystery series under the name Lori Armstrong and her novel Snow Blind just won the 2009 Shamus Award from the Private Eye Writers of America for Best Paperback Original! Check it out at http://www.loriarmstrong.com/


She surrendered the reins. Now he's raising the stakes.

When a patch of ice sends attorney Ginger Paulson head-over-high-heels down a flight of stairs, she has no one to care for her young son and her invalid father - until lethally sexy Kane McKay shows up at the hospital, determined to prove his cowboy chivalry. Past experience has inoculated her against take-charge men, but even Ginger isn't immune to Kane's invasive charm and Built Ford Tough body.

For two years rancher Kane McKay has followed the Little Buddies mentoring program's cardinal rule - hands off his Little Buddy Hayden's mama. But one look at Ginger's bruised body and Kane is through watching the stubborn woman take care of everyone but herself. The feisty, curvy redhead needs his help, and he'll give her the hands-on type whether she likes it or not.

Can the former hell-raiser convince the gun-shy single mom to look beyond his past...toward a shared future?

Warning: Contains one sweet and hot hunk of cowboy manflesh who uses every sexual trick in the book to render a sassy, fast-talking attorney speechless and put a new twist on the term "binding arbitration".

WIN - Leave Lorelei a comment or question today at her Cyber Launch Party and your name goes in the hat for a free download of your choice from Lorelei's Rough Riders Book one through eight. Please leave your email address and which book from Lorelei's Rough Riders Books you'd like to win so we can contact you if you are today's winner!
Posted by AuthorIsland.com at 9:00 AM