The fifth book in the Rescue Me Saga released Dec. 9. While we all were expecting it to be time for Luke and Cassie, Kally’s recent battle with cancer derailed those plans. But not wanting to disappoint her fans, she wrote what was going to be a book about half this size but just kept growing so that she could give her fans a book this fall as promised.

NOBODY’S LOST is about two characters who have had minor roles to this point in the Rescue Me Saga, but who will play a large part in the future books in the series, including NOBODY’S DREAM (Luke’s book which will release by March 4, 2015 now that Kally’s cancer free and able to concentrate on it again.)

Haven’t read Kally’s books before? No problem! NOBODY’S LOST is a standalone novel about two characters with very minor mentions in the earlier book and provides readers with a new entry point to the series. However, most readers enjoy and understand the depth of these stories much more so when they read in order, starting with the first book, MASTERS AT ARMS & NOBODY'S ANGEL (almost 500 pages in print!), which is FREE everywhere. That's the ideal place to start! Here's the reading order for all available books (including preorders): 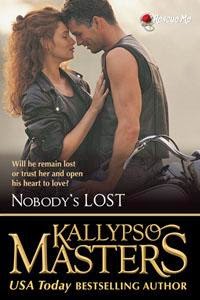 Ryder Wilson returned from serving multiple deployments but can't leave the hell of combat behind him. Frustrated and ashamed of his inability to function in the world as well as the veterans he served with, he retreated, choosing to engage only with those he trusted. When retired Master Sergeant Adam Montague sends him on a mission to protect his sister from some unknown danger, Ryder's days of hiding out may be over. Can he fulfill his mission without failing again?

Megan Gallagher has two big-brother Marines bent on protecting her from the evils of the world, but she's tougher than they think. When her older brother sends Ryder, one of his recon Marines, to her doorstep in the wee hours one night following a break-in, she realizes he needs rescuing more than she does. A friendship forms quickly, but unexpected passions run hot and complicate her resolve never to have a romantic relationship, much less marriage. So why are her body and her heart betraying her every time he comes near?

Can these two wounded people lower their defenses long enough to allow love to grow?

BUY THE eBOOK *** READ THE EXCERPT 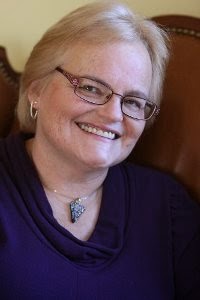 Kallypso Masters writes emotional, realistic Romance novels with dominant males (for the most part) and the women who can bring them to their knees. She also has brought many readers to their knees— having them experience the stories right along with her characters in the Rescue Me series. Kally knows that Happily Ever After takes maintenance, so her couples don’t solve all their problems and disappear at “the end” of their Romance, but will continue to work on real problems in their relationships in later books in the series.

Kally has been writing full-time since May 2011, having quit her “day job” the month before. Kally lives in rural Kentucky and has been married for 30 years to the man who provided her own Happily Ever After. They have two adult children, one adorable grandson, and a rescued dog and cat. Kally enjoys meeting readers at national romance-novel conventions, book signings, and informal gatherings (restaurants, airports, bookstores, wherever!), as well as in online groups. She hopes to meet you in her future travels! If you meet her face to face, be sure to ask for a Kally’s friend button!

I enjoy meeting readers and have traveled extensively to try to get to every state (someday!) to hold events as big as a KallypsoCon or as small as an intimate dinner for 3. However, because I want to give my readers more books to read, I'm scaling way back on appearances in 2015 so I can hunker down in the writing chair. (I write in a glider, exactly like the one I describe in Adam's bedroom at the Masters at Arms Club.) Coming in 2015 are NOBODY'S DREAM (Rescue Me Saga #6--the long-awaited Luke and Cassie story) and a novella (or short novel--you know I don't write short because NOBODY'S LOST started out to be a 35-40,000-word novella and it ended at 71,000 words. The couple in that novel will be Pamela (the NICE ex-girlfriend of Marc D'Alessio's who you met in SOMEBODY'S ANGEL) and Master Roar (Kristoffer Larson--a relative of Gunnar Larson's, who trained Damian and Grant as dominants). Then I'm not sure which direction I'll go. Grant and Patrick were HUGE in NOBODY'S LOST, and I planned a spin-off three-book romantic suspense (with BDSM) for them. I may have to decide if the time is right to begin Patrick's story. Let me know what you think after you read LOST!

But I'm also wanting to start the spin-off series about Angelina Giardano’s firefighter brothers with Tony (her brother) and Carmella (Marc's sister) as the potential first couple. Sparks sure were flying between them in that scene in SOMEBODY'S ANGEL. Definitely something I want to explore!

As far as 2015 appearances, I'll be attending RomCon in Denver, Colorado, in September. And the weekend before I will be conducting a Rescue Me Saga private sightseeing tour of the places I write about in Denver and areas near Breckinridge. That package will include lodging for three nights, bus transportation for the tour, and at least one special meal each day.

I'm also planning my second KallypsoCon to be held in the Boston, Mass., area in late October or early November. In March, I'll be announcing the authors who will join ne AND will open up registration for the VERY limited number of reader spots. (We want to keep this intimate and relaxing, which is what everyone at the first event loved most. We only had 85 attendees, including 7 authors, but will probably have 8 or 9 authors and up to 110 readers at this one (since so many of those who were at the first one want to be there).

What else is there to know about me? Well, I've been writing full-time since May 2011, having quit my “day job” the month before. I live in rural Kentucky and have been married for more than 30 years to the man who provided my Happily Ever After. We have two adult children, one adorable grandson (Erik, who my followers on FB hear about often!), and a rescued dog.

Here are some of the places where you can learn more about me and my books online:
My web site: http://kallypsomasters.com/
Facebook Author Page:https://www.facebook.com/KallypsoMastersAuthorPage

My Facebook Profile https://www.facebook.com/kallypsomasters (I'm close to max friends, so I only send friend requests to those who message me saying they want to engage by commenting or posting on my timeline, BUT anyone can follow me and see almost everything I put up there. It's 99.9% public.)

For fans of my Rescue Me Saga who don't mind spoilers and are caught up with the series as much as you can be, I have a secret Rescue Me Saga Discussion Group here. To join, just send a friend request to Karla Paxton (a dummy account that is ONLY there to be a gateway to the group and is monitored by one of my team members). If you are already a member of the group, please don't send another request. Karla unfriends you after you are added so we can keep up with new requests. Here's her link:https://www.facebook.com/profile.php?id=100004338888051
Twitter: https://twitter.com/kallypsomasters