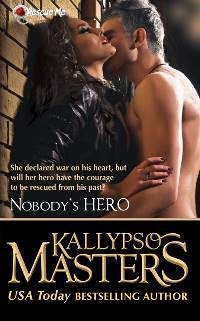 NOBODY'S HERO is the continuing romantic journey of Adam and Karla, which began in MASTERS AT ARMS and NOBODY'S ANGEL.

Retired Marine Master Sergeant Adam Montague has battled through four combat zones, but now finds himself retreating from Karla Paxton, who has declared war on his heart. With a significant age difference, he feels he should be her guardian and protector, not her lover. But Karla's knack for turning up in his bed at inopportune times is killing his resolve to do the right thing. Karla isn't the young girl he rescued nine years earlier—something his body reminds him of every chance it gets.

Their age difference is only part of the problem. Fifty-year-old Adam has been a collector of lost and vulnerable souls most of his life, but a secret he has run from for more than three decades has kept him emotionally unable to admit love for anyone. Will Karla be able to break through the defenses around his heart and help him put the ghosts from his past to rest? In her all-out war to get Adam to surrender his heart, will the strong-willed Goth singer offer herself as his submissive and, if so, at what cost to herself?


ABOUT THE RESCUE ME SAGA: The books in the ongoing Rescue Me Saga are not stand-alone stories and should be read in order. Characters will recur in later books to deal with further issues in their lives as the saga continues and each book builds upon all previous ones. Sometimes main characters even need another book to help resolve major issues affecting their relationships.


BONUS MATERIAL in this version: Kallypso Masters has added the PLAYLIST of music that inspired her as she wrote about the first three couples mentioned in this combined volume, as well as a GLOSSARY OF TERMS and a CAST OF CHARACTERS in these books in the saga.


Kallypso Masters writes emotional, realistic Romance novels with dominant males (for the most part) and the women who can bring them to their knees. She also has brought many readers to their knees— having them experience the stories right along with her characters in the Rescue Me series. Kally knows that Happily Ever After takes maintenance, so her couples don’t solve all their problems and disappear at “the end” of their Romance, but will continue to work on real problems in their relationships in later books in the series.

Kally has been writing full-time since May 2011, having quit her “day job” the month before. MASTERS AT ARMS was her debut novel (published in August 2011), followed by NOBODY'S ANGEL, NOBODY'S HERO, NOBODY'S PERFECT and SOMEBODY'S ANGEL.  Next she looks forward to writing the long-awaited book of Luke, NOBODY'S DREAM.

Kally lives in rural Kentucky and has been married for 30 years to the man who provided her own Happily Ever After. They have two adult children, one adorable grandson, and a rescued dog and cat. Kally enjoys meeting readers at national romance-novel conventions, book signings, and informal gatherings (restaurants, airports, bookstores, wherever!), as well as in online groups (including Facebook’s “The Rescue Me Series Open Discussion” secret group— send a friend request to the Karla Montague link below on Facebook to join; she also visits the Fetlife “Rescue Me! Series Discussion Group” regularly) and in live online chats. She hopes to meet you in her future travels! If you meet her face to face, be sure to ask for a Kally’s friend button!

We're also celebrating all day today over on Facebook!  Stop by to meet Kallyspo and learn all about her Rescue Me Series!  Kallyspo Master's Facebook Event
Posted by AuthorIsland.com at 6:00 AM