From a shameful past, rises a vital destiny...

"The junkie whore shall save the trinity in the first hour." So spoke the insane Luk, last of the Ancient undead prophets. The enigmatic vampire Dmitriu believes he knows the junkie whore in question, destined to save the daughter of his creator Saloman.

But the Edinburgh prostitute Janine, who once showed Dmitriu kindness, has not only got clean; she's become a vampire hunter, determined never to be helpless in anyone’s power again; and Dmitriu's pretty high on her kill list. Instead of renewing his beguiling sexual relationship with her, he has to kidnap her to force her cooperation. Bombarded with sensual memory and the lust Dmitriu still inspires in her, Janine also has to fight her way through renegade hunters, Dmitriu's rebellious creation, Antonia, the bizarre Militant Church for the Defence of the Holy Trinity and the first anti-vampire protests. It’s too much; the prophecy could be broken.

Unless Janine's destiny is Dmitriu. 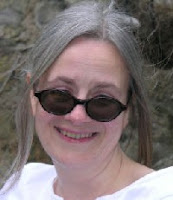 
Check out Marie Treanor's Facebook Event for fun conversation and teasers!
Posted by AuthorIsland.com at 10:00 AM