After Ethan Hodges discovers an undersea cemetery just off the beach of Pelican Bay, South Carolina, he seeks answers from a grandfatherly fisherman named Captain Shelby.

The captain wants the past to remain buried, and he warns Ethan to stay away. But Ethan doesn’t listen.

When Captain Shelby is suspected of murder and disappears, a manhunt ensues, revealing a truth that unnerves everyone in Pelican Bay. 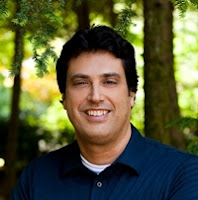 Jesse Giles Christiansen is an American author who writes compelling literary fiction that weaves the real with the surreal. He attended Florida State University where he received his B.A. in English literature. He wrote his first novel, “About: Journey Into The Mystic” after spending a summer in Alaska working on fishing boats. His newest novel, “Pelican Bay,” focuses on a very old fisherman, Captain Shelby, and the mysterious happenings linked to him surrounding a nosy, sea-battered beach town (release date: July 20th, 2013, Imajin Books). One of his literary goals is to write at least fifty novels, and he reminds himself always of something that Ray Bradbury once said: “You fail only if you stop writing.”

WIN - Jesse Giles Christiansen has a $75 Amazon Gift Card Up For Grabs to celebrate his new release PELICAN BAY!  Head to Captain Shelby's Facebook Page to check it out!
Posted by AuthorIsland.com at 10:00 AM