Meresin is the fallen angel that Ceila abhors. He’s rude, demanding and serves the Dark One. He loathes humans and considers them to be inferior to angels. This means that even though she’s only part human, he finds her objectionable at first.

Despite their intense dislike of each other, they are forced to be together by the action of demons, and their feelings begin to change. Will he ignore her humanness? Can she overlook his ruined nature and dark ways?

When an attraction develops between them, should they forget their previous hatred and help one another? Meresin becomes her rescuer and Ceila is grateful for his aid. So is it possible for love to sweep away their former antagonism? 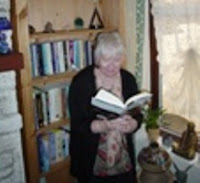 Marion Webb-De Sisto was born and grew up in the UK, but spent many of her adult years in the US. She now lives with her American husband in the Greater London Area. This author enjoys creating tales of adventure and romance that are set in the world of angels and demons. She holds a fascinated interest in the Celestial Hierarchy, as well as in several Fantasy realms and other realities.

Marion has also written five non-fiction books. Two detail her contact with the spirit world, while two others give insight into the beautiful and fascinating crystals and crystal skulls. Another one shares information about the healing Bach Flower Remedies. Her books have been repeatedly placed in Amazon’s top 100 sales rankings for specific subjects, e.g. Crystals, Channeling, Herbal Remedies, Fantasy Epic and Divination.

WIN - Marion is offering up a print copy of her new release and an ebook of  TAKEN.  To get your name in the hat for one of her prizes today, leave a comment either here at her blog party or over at Marion's Facebook event or BOTH - the more you comment, the better your chances!!  Check out Marion's new facebook page to learn more about Marion's MAGICAL WORLD OF CYMLLON.
Posted by AuthorIsland.com at 6:00 AM