Celebrating The Box Set Release Of Tall, Dark And Alpha

All day today on our Cyber Launch Party Blog, we're celebrating the TALL, DARK AND ALPHA box set release!  Leave a comment today on our blog, and you're name goes in the hat for a copy of the box set!  Please leave your email address, so we can contact you if you are today's winner!

For another chance to win, head over to the TALL, DARK AND ALPHA Facebook Event today! 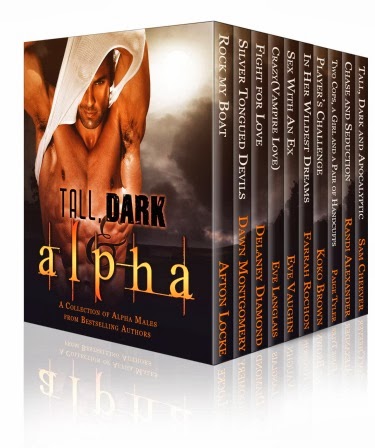 Who doesn't love an ALPHA male? We certainly do! Which is why these 10 bestselling romance authors banded together to create the Tall, Dark and Alpha box set for your reading pleasure! Here's what you'll get in this wonderful and sexy set:
He makes your heart pound and melts your resistance away. He promises you a world of passion and you find it impossible to resist his dark charm. When he catches your eye across the room, you know he means business. He could be an executive, cop, shape shifter, or a bad boy looking for a little fun. Once he has you in his sights, you can't get away—and after one sizzling night in his arms, you won't want to. He’s Tall, Dark & Alpha. The alpha male is the ultimate indulgence…the richest dark chocolate…and we’re offering him to you in abundance.
Delve into the sensual worlds of award-winning authors: Randi Alexander, Koko Brown, Sam Cheever, Delaney Diamond, Eve Langlais, Afton Locke, Dawn Montgomery, Farrah Rochon, Paige Tyler, and Eve Vaughn. Immerse yourself in the alpha male experience.
BUY THE BOX SET
Sam Cheever - Tall, Dark and Apocalyptic
Website: http://www.SamCheever.com
Facebook Author Page: http://Facebook.com/Sam Cheever Author
Twitter page: Twitter.com/samcheever
Blog: http://www.SamCheever.com/blog
A grand passion in an apocalyptic world. A love beyond reason and without boundaries.
He’s a warrior, a bounty hunter in a world turned upside down. She’s a target, a creature of dark magic. His job is simple. Kill the target. Her goal is more complex. She must stay alive until she finds and destroys the source of death magic staining the twenty worlds. But the passion burning within them may be their undoing. It’s going to take an apocalyptic will to overcome the distraction their bodies are creating…and not lose themselves in the process.

Afton Locke - Rock My Boat
Website: http://www.aftonlocke.com
Facebook: https://www.facebook.com/AftonLockeAuthor
Twitter: http://twitter.com/aftonlocke
Newsletter: http://groups.yahoo.com/group/thelovechronicle/
Goodreads: http://www.goodreads.com/Afton_Locke
Once addicted to the sea, you can’t escape its pleasures.
Workaholic CEO Rhonda Simms embarks on a Caribbean cruise to create an ad campaign for a big maritime freight client. She finds it impossible to concentrate, however, when Simon Mann, a blue marlin shifter, sets his sights on her. From a private, hands-on safety briefing to a wild ride in the ocean, he rocks her ordered world.
Simon drowned years ago in a shipwreck caused by Rhonda’s client, and he’ll do anything to be a normal man again. As his mate, Rhonda is the only person who can help him.
Tired of being so responsible, Rhonda is ready to let loose with a shipboard fling. Mating with Simon could cost a lot more than her virginity, however. Will she stick to her present course or will she let this sexy alpha rock her boat?

Dawn Montgomery - Silver Tongued Devils
Website: http://www.dawnmontgomery.com
Writing Blog: http://www.dawnmontgomerywrites.wordpress.com
Facebook: http://www.facebook.com/AuthorDawnMontgomery
Twitter: http://www.twitter.com/Dawn_Montgomery
Pinterest: http://www.pinterest.com/DawnMAuthor
She was always one step from hell until she found redemption in their arms.
Ship thief and notorious escape artist, Raesa Daw was the best in the business until a routine DNA test proves that she’s the last Earthen pureblood in existence. Desperate to escape sexual slavery and breeding for a royal house, she flees the station on the Crimson Star, landing in the arms of a deadly half-breed, Brom Raine.
One kiss burns away her fear, but opens a world more dangerous than she’d ever known.
Captain Anderson Na’varr of the Mercenary frigate Crimson Star shows no mercy to those who stow away on his vessel. He will take the thief and show her exactly how erotically ruthless he and his Executive Officer, Brom, can be.
Seduced by the dark lust and hidden strength of both men, she vows to do everything in her power to corrupt her DNA before the slavers find her.
Na’varr realizes Raesa holds the key to survival, and losing her to the Republic would destroy the fragile peace he and Brom had found in her arms. Her courage would lead them out of the depths of hell but only their love could keep her alive.

Delaney Diamond - Fight For Love
Web site: http://delaneydiamond.com
Facebook: https://www.facebook.com/DelaneyDiamond
Twitter: https://twitter.com/DelaneyDiamond
Goodreads: https://www.goodreads.com/Delaney_Diamond
A former pro wrestler fights to hold onto the woman he lost, but still loves, and the son he never knew existed.
Science teacher Rebekah Jamison lives a quiet life in the suburbs of Atlanta. Devastated by a tabloid scandal nine years ago, she ended her marriage to the man her parents never approved of.
Rafael Lopez, former professional wrestler and “Sexiest Athlete Alive,” regrets the lapse in judgment that caused him to lose his wife. He shows up unannounced one day with some startling news, but he gets a surprise of his own. He finds out he’s a father. To get to know his son, he whisks him and Rebekah off to his home in the Hollywood Hills for the summer.

Eve Langlais - Crazy (Vampire Love)
Website: http://www.evelanglais.com
Facebook: https://www.facebook.com/eve.langlais.98
Twitter: https://twitter.com/EveLanglais
Blog: http://www.evelanglais.com/wordpress
Ella hears voices and they don’t like anyone.
Ella’s always heard voices and because of them, she ends up institutionalized at a young age. Everyone calls her crazy and she believes she is too until the night she meets a vampire and for the first time in her life, the voices shut up.
Zane just wants to enjoy his usual blood buffet, instead he runs into a wisp of a woman who makes him feel emotions he thought long dead. Rescuing her from the insane asylum, he brings her home, determined to seduce and feed from her, a plan that is foiled by ghostly voices determined to keep Ella untouched. But not even poltergeists can stand in the way of a vampire in love.

Eve Vaughn - Sex With an Ex
Website: http://www.evevaughn.com/
Twitter: https://twitter.com/Eve_Vaughn
Facebook: https://www.facebook.com/pages/Eve-Vaughn/156372768726
After a devastating break-up, Riley Mason believed she had moved on with her life. That is until she crosses paths with the one man who still makes her pulse race and knees buckle, her ex husband Ethan Boudreaux. Though she tries to fight it, the attraction is stronger than ever.
Ethan Boudreaux’s greatest regret is walking away from the woman he loved. But when he’s presented with a second chance with Riley, there’s no way he’ll let the opportunity slip through his fingers. He soon devises a plan to get her back into his life and in his bed.
When these two divorcees reunited in the bedroom, the sex is hotter than ever. But can their hearts survive the second time around?

Farrah Rochon - In Her Wildest Dreams
Website: www.farrahrochon.com
Facebook: www.facebook.com/authorfarrahrochon
Twitter: www.twitter.com/FarrahRochon
As owner of Your Wildest Dreams, Erica Cole specializes in creating over-the-top fantasy date nights for her clients, although she never anticipated the headaches that would come with owning her own business. When a consulting firm shows interest in franchising Your Wildest Dreams, Erica is over the moon at the thought of her longtime dream becoming a household name…and the financial payoff that is sure to come. Now, she must create the ultimate Valentine’s Day experience, and Erica knows just who to call to help her plan it.
Since Gavin Foster opened Decadente Artisan Chocolates, life has never been sweeter. The former tech company CEO has found his true calling, creating high-end chocolates for the discerning palettes of New Orleanians…and the best friend whom he wishes were more, Erica Cole. When Erica requests his help in creating a Valentine’s Day fantasy, Gavin sees it as the perfect opportunity to show her just how sweet their reality could be.

Koko Brown - Player's Challenge
Website: kokobrown.net
Facebook: facebook.com/authorkokobrown
Footballer Devin Spencer is a bad boy in need of handling. Notorious for his off-field exploits, he’s pushed one too many buttons even his agent has washed his hands of him. If he doesn’t straighten up his act, the Champions League goalie could face his last days on the pitch.
Gemma Clarke is at the top of her game. She’s a sports agent with a bright future ahead of her. The only dark spot? The recent addition of her former lover Devin Spencer to her client roster.
Their passionate love affair abruptly ended when Croydon F.C.’s development team came calling and he walked away without looking back.
Now Devin’s back, the chemistry between them is hotter than ever, and he wants to prove to Gemma he’s a changed man. Can this bad boy footballer gain Gemma's trust and get her to over-look the no fraternizing clause in her contract?

Paige Tyler - Two Cops, a Girl and a Pair of Handcuffs
Website: http://www.paigetylertheauthor.com
Blog: http://paigetylertheauthor.blogspot.com/
Facebook Author Page: http://www.facebook.com/PaigeTylerAuthor
Twitter: http://twitter.com/PaigeTyler
Pinterest: http://www.pinterest.com/paigetylerauth/
Working the late shift just got a whole lot more fun!
Cilla Garner has it bad for Hayes Prescott and Reed Lockwood, the two hot cops who come into the coffee shop where she works the late shift. When her coworker goes home early and leaves her alone with Denver's finest, she can't help but flirt. Of course, if they both end up asking her out, she has no idea how she'll choose. The idea of having a threesome doesn't even enter her mind until they hint at it, and then it's all she can think about.
She has the perfect opportunity to take them up on it when they offer to drive her home after work. What girl wouldn't be thrilled at the idea of sleeping with two guys who come with their own handcuffs?

Randi Alexander - Chase and Seduction, Book 1 of the Hot Country Series
Website: RandiAlexander.com
Facebook Fan Page: https://www.facebook.com/pages/Randi-Alexander-Books/401939699893294
Twitter: https://twitter.com/Randi_Alexander
Goodreads: http://www.goodreads.com/author/show/4885056.Randi_Alexander
Pinterest: http://www.pinterest.com/randialexander1/
Country music superstar/actor Chase Tanner has yet to be denied anything–and he’s never wanted anything or anyone more than gorgeous screenplay writer Reno Linden. So when the film they are working on is finally finished, Chase decides to turn up the volume on seducing Reno.
Reno Linden lived a quiet, rural life until she was thrust into the Hollywood scene when her book was adapted to film. Chase Tanner is larger than life, sinfully sexy and hell-bent on getting her into bed. Skittish after a failed wedding engagement, Reno risks the plunge into Chase’s arms, and is surprised that her good girl self can keep up with bad boy Chase.


Though Chase returns to his cowboy roots often, and Reno cherishes the time spent with him on his ranch, the two find their careers pulling them in different directions. Will their attraction survive the glitz and stress of fame?